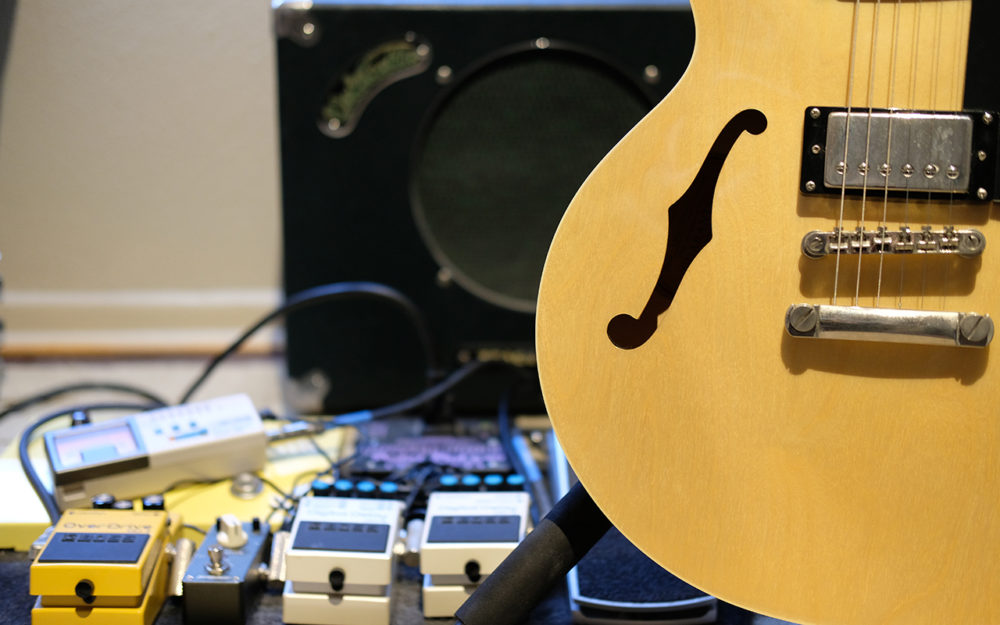 Admittedly, I’m a little bit of a tone snob.

It started when I first got into music. I have always tried to optimize every part of my signal chain based on what I could afford. The cheapest, no-frills, professional guitar; the best drum kit I could justify; outboard microphone preamps–I would even make my own cables and microphones because I could get a better sound quality for an equivalently priced factory made item.

One of the areas that I particularly held on to this belief was in my guitar rig. I tried to keep my signal chain as pure as I could. Most of the time, I would go straight into my 15 watt Trace Elliot Velocette and crank it all the way up. That rig would do me fine for most of the bands that I would play in. I would often walk into a rehearsal studio with the Velocette and an Epiphone ES-339, set it next to the other guitar’s Valvastate Marshall half-stack and drown him out.

By playing in different bands, playing different styles of music and smaller coffee shop gigs, I realized that the Velocette was too loud. I needed to introduce an overdrive pedal into my signal chain. A single overdrive was fine, but I had reservations about adding a bunch of pedals to the signal chain–especially if they were digital. I also needed a reverb solution, so I added a Dan Electro Spring King pedal which is an actual analog spring reverb pedal.

There was just something about going digital that rubbed me the wrong way. Why would I spend all this time and money to build this rig that was all awesome tube tone and then add a pedal that was converting my signal to digital, applying a digital effect and then converting it back to analog?

This, to me, was blasphemy. . .and it would completely kill my tone, right?

It wasn’t until I started working with another guitarist on a recording who would track his parts and send them to me to finish mine. I would mic up my rig, but I could never get mine to sound as present as his sound. I can attribute part of this to the fact that he is a better guitarist than I am, but I asked him what kind of rig he was running through because it had the great “spongy” sound that I like in my tube amp, but it was just brighter and more lively. He said that he was running his guitar directly into his interface and was using Digidesign Eleven Rack plugin.

This really made me reevaluate my thinking. I spent so much time tracking and re-tracking my guitar, adjusting the amp settings, moving the mic, trying to get my guitar sound to be better than his. I was finally able to get a sound that I felt was more “analog” sounding than his, but it took about 2 days of tracking my guitar and I had to A/B the tracks side by side to be able to tell which one was which.

This brings me to the point of this post: How important is tone to your sound?

For the majority of the listeners, it doesn’t really matter. For the masses, the “good enough” threshold is far lower than most artists will acknowledge. There is something to be said about technically listening to a production for the engineering and producing mastery that happened on that recording.

But, bottom line, most people respond to a song based on an emotional connection they have with it. That can take many forms, such as relating to lyrics; loving the way a musician phrases a riff; or the way a song can make the listener feel the groove, making them want to move.

The reason that tone is important to me is because it is a mastery and artistry in the performance and production of a song. This motivates me to explore a song as I am producing or performing it. I get a no-frills satisfaction from having gear that produces a certain sound that appeals to me.

When I first get a new piece of gear, I explore all the different tonal possibilities it has and how to use it. Once I understand how it fits my style, I can figure out how to apply that to a song I’m working on. I do have to say that it can be quite expensive to go this route. Typically, I’ll pay a lot more for something that does one specific thing really well rather than buy a digital modeler of that instrument that is almost as good, but also does 20 other instruments equally well.

But, in the end, that little bit of extra tone makes me feel good about what I’m producing.